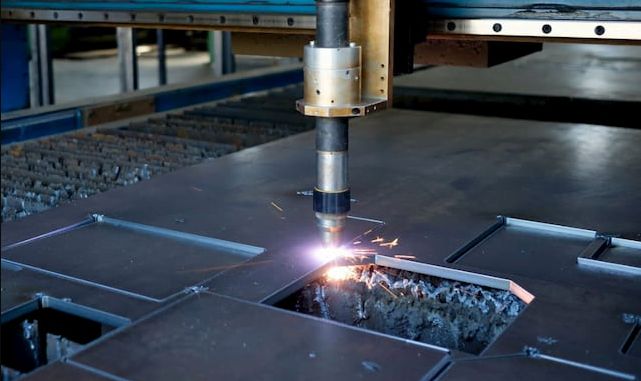 Plasma cutting (plasma arc cutting) is a melting procedure that uses an ionized gas jet at temperatures above 20,000°C to melt and expel material from the cut. An electric arc is formed during the process between an electrode (cathode) and the workpiece (anode).

The electrode is recessed in a water- or air-cooled gas nozzle, which constricts the arc, resulting in the formation of a narrow, high-temperature, high-velocity plasma jet.

When the plasma jet strikes the workpiece, recombination occurs and the gas returns to its normal condition, emitting high heat in the process. This heat melts the metal, which is then ejected from the incision by the gas flow. Typically, plasma gases are argon, argon/hydrogen, or nitrogen.

These inert gases can be replaced by air, but only with a specific hafnium or zirconium electrode. Because compressed air is used, this plasma process type is highly competitive with the ox-fuel process for cutting carbon-manganese and stainless steels up to 20mm thick. For high-quality cutting in reactive alloys, inert gases are preferred.

Plasma arc can cut a wide variety of electrically conductive materials such as carbon and stainless steel, aluminum and its alloys, nickel alloys, and titanium. Originally, the technology was created to cut materials that could not be cut successfully by the ox-fuel process. The plasma torch is normally moved while the component or sheet to be cut stays stationary.

Furthermore, because the plasma torch is inexpensive in comparison to the manipulation equipment, it is typical to mount numerous torches on a cutting table.

Plasma arc cutting can also be done underwater with the right equipment.

Plasma arc cutting with high tolerance (HTPAC) is a significant advancement in plasma arc technology.
The procedure provides more precision on materials less than 12mm thick and can be a less expensive alternative to laser cutting.

Figure 1 depicts the plasma arc-cutting process. The arc created between the electrode and the workpiece is restricted by a fine bore, copper nozzle. The temperature and velocity of the plasma emitted from the nozzle rise as a result.

The temperature of the plasma exceeds 20 000°C, and its velocity can approach that of sound. When utilized for cutting, the plasma gas flow is increased, allowing the deeply penetrating plasma jet to cut through the material and the molten material to be removed in the efflux plasma.

The plasma in the typical system with a tungsten electrode is inert and generated using either argon, argon-H2, or nitrogen. However, as explained in Process Variants, oxidizing gases such as air or oxygen can be utilized, but the electrode must be made of copper and hafnium.

The plasma cut edge quality is comparable to that obtained with the ox-fuel technique. However, because the plasma process involves melting, a distinguishing feature is the increased degree of melting towards the top of the metal, which results in top-edge rounding, poor edge squareness, or a bevel on the cut edge. Because these limits are related to the degree of arc constriction, many torch designs are available to increase arc constriction and generate more uniform heating at the top and bottom of the cut.

The process variants, shown in Figs. 2a to 2e has been designed primarily to improve cut quality and arc stability, minimize noise and smoke, or increase cutting speed.

The procedure works in the same way as the conventional method, but a secondary gas shield is added around the nozzle, as shown in Fig. 2a. The secondary gas’s favorable benefits include enhanced arc constriction and more effective ‘blowing away’ of dross. The plasma-generating gas is often argon, argon-H2, or nitrogen, and the secondary gas is chosen based on the metal being cut.

Normally, nitrogen is employed as the plasma gas. To increase the degree of constriction, water is fed radially into the plasma arc (Fig. 2b). The temperature is also significantly raised, reaching as high as 30,000°C.

Advantages over traditional plasma include:

The plasma can be used with a water shroud, as shown in Fig. 2c, or with the workpiece submerged 50 to 75mm below the water’s surface. When compared to typical plasma, the water functions as a barrier, providing the following benefits:

A water shroud was helpful in reducing noise levels to about 96dB and cutting beneath water down to 52 to 85dB a typical example of noise levels at high current levels of 115dB for traditional plasma.

Because the water shroud does not raise the degree of constriction, the cut edge squareness and cutting speed are not considerably increased.

The inert or nonreactive plasma-producing gas (argon or nitrogen) can be substituted with air, but this necessitates the use of a specific hafnium or zirconium electrode mounted in a copper holder, as shown in Fig. 2d. Air can also be used to cool the flame instead of water. An air plasma torch has the advantage of using air rather than expensive gases.

Although the electrode and nozzle are the only consumables, hafnium-tipped electrodes can be more expensive than tungsten electrodes.

High Tolerance Plasma Arc cutting (HTPAC) systems, which work with a highly confined plasma, are offered in an attempt to increase cut quality and compete with the superior cut quality of laser systems. The plasma is focused by swirling the oxygen-generated plasma as it enters the plasma orifice and injecting a secondary flow of gas downstream of the plasma nozzle, as shown in Fig. 2e.

A distinct magnetic field surrounds the arc in some systems. This stabilizes the plasma jet by keeping the whirling gas’s spin going. The following are the benefits of HTPAC systems:

HTPAC is a mechanical process that necessitates precise, high-speed equipment. The primary drawbacks are that the maximum thickness is limited to roughly 6mm and the cutting speed is generally slower than traditional plasma procedures and 60 to 80% slower than laser cutting.

1 thought on “Arc Plasma Cutting & How does it Work?”

UTECHWAY.COM IS A PARTICIPANT IN THE AMAZON SERVICES LLC ASSOCIATES PROGRAM, AN AFFILIATE ADVERTISING PROGRAM DESIGNED TO PROVIDE A MEANS FOR SITES TO EARN ADVERTISING FEES BY ADVERTISING AND LINKING TO AMAZON.COM. AS AMAZON ASSOCIATES WE EARN AFFILIATE COMMISSIONS FROM QUALIFYING PURCHASES.